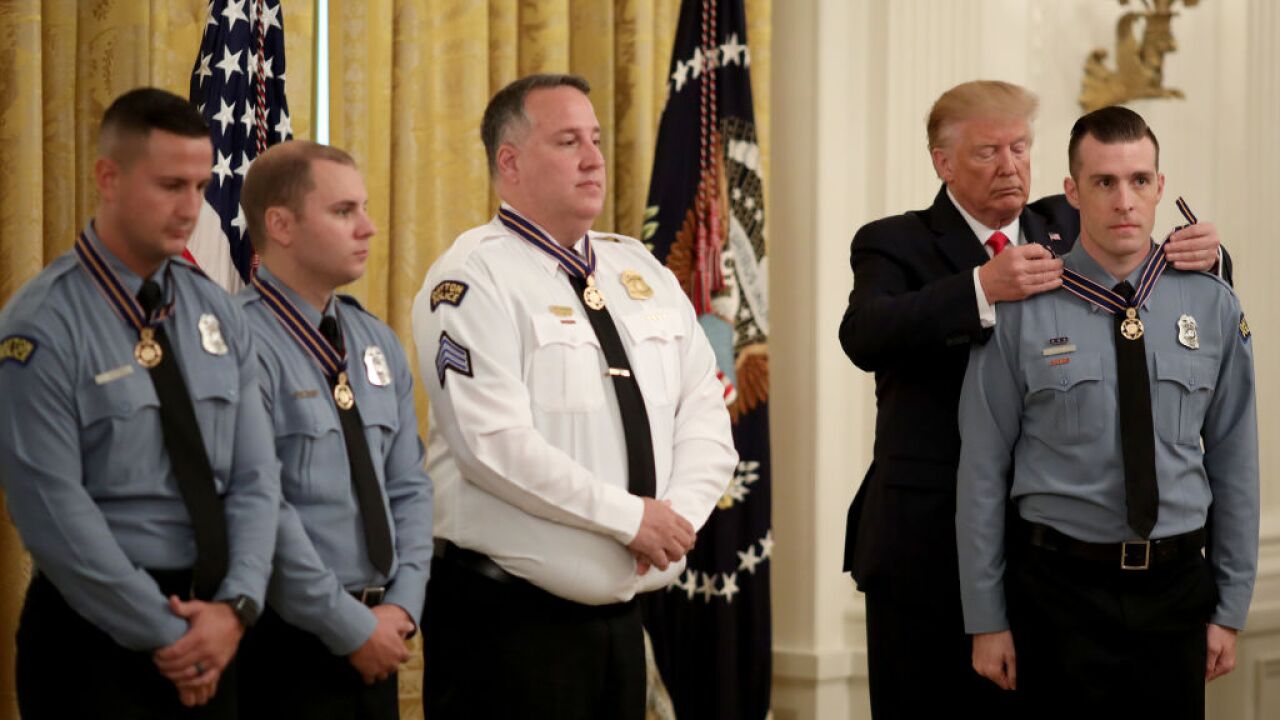 Appearing alongside Attorney General William Barr, the president presented the Public Safety Officer Medal of Valor to the officers who first responded to the Aug. 4 mass shooting in the Oregon District. The officers confronted the shooter within 30 seconds, a swift response credited with preventing more deaths

Honored were Sgt. William Chad Knight and officers Brian Rolfes, Jeremy Campbell, Vincent Carter, Ryan Nabel and David Denlinger. The president led a long round of applause for them and hung the medal on each man.

“Who can even understand how many lives would have been taken if they didn’t act so quickly?” Trump said in his remarks in the East Room.

“Millions of Americans saw the video footage of these officers calmly charging forward in the midst of chaos and constant fire. Without a thought for their own safety they stood square to the target, executed their mission and brought down the murderer with precision gunfire

“To each of you, we are in awe of your quick response, sterling professionalism and rock-solid nerves of steel. On behalf of our entire nation, we thank you for your remarkable and heroic actions in the line of duty.”

“There are few people who could have done, and would have done, what these police officers did,” Trump said from the White House’s East Room. “To each of you, we are in awe of your swift response, sterling professionalism, and rock-solid nerves of steel.”

The City of Dayton released this statement on today’s events:

“We are incredibly proud and honored to share in the recognition of Sergeant William C. Knight, Officer Brian Rolfes, Officer Jeremy Campbell, Officer Vincent Carter, Officer David Denlinger, and Officer Ryan Nabel in receiving the Medal of Valor bestowed by the U.S. Department of Justice and awarded by the President of the United States Donald Trump. We are deeply grateful for all of the love, support and recognition we have received from members of our community, our country, and from around the world in response to these officers’ heroic and selfless service on August 4, 2019.”