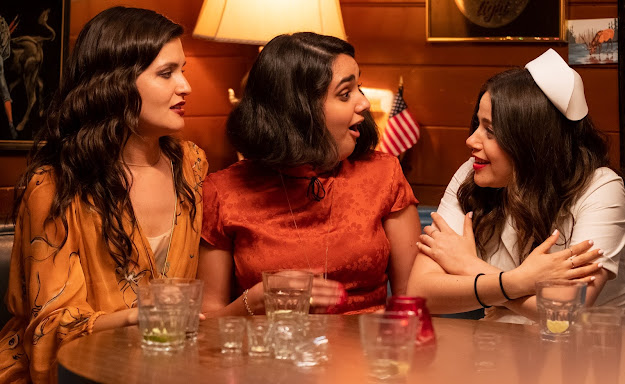 THE BACK STORY: Lucy (Geraldine Viswanathan) shares an apartment in New York City with her longstanding friends Amanda (Molly Gordon) and Nadine (Phillipa Soo). While Amanda has found her niche with her silent boyfriend Jeff (Nathan Dales) and Nadine dumps her suitors before she can barely learn their names, Lucy doesn’t do well with breakups, which is why she keeps mementos from all of her past relationships in her room. Thus, when she sees her boyfriend/co-worker Max (Utkarsh Ambudkar) a little too close to an old flame (Tattiawana Jones) during an event at the art gallery owned by Eva Woolfe (Bernadette Peters) where they both work, the alcohol and insecurity mix to cause an incident.

This leads to her inadvertently meeting Nick (Darce Montgomery), an aspiring niche hotel designer she mistakes for her Uber (or is it Lyft? We may never know …) driver. But as fate would have it, this chance encounter could end changing both of their lives – and countless others struggling to get over their old flames – forever.

THE REVIEW: A film that has to be the early contender for the most woke mainstream romantic comedy released by a major Hollywood studio during a pandemic thus far, The Broken Hearts Gallery is a predictable yet enjoyable romantic comedy that gives hope to hopeless romantics everywhere.

A romantic comedy for millennials that makes sure to check (nearly) every box on the inclusion checklist, The Broken Hearts Gallery works well enough largely due to the hot-mess-that-you-still-root-for performance of Viswanathan. Sure, there are times when she and her cohorts’ behaviors make you question whether or not they are parodying millennials or portraying them with annoying accuracy, but the overall charm of the characters makes you want to see them reach their eventual destiny.

Again, this isn’t meant as a diss to the film; there’s just nothing happening here that really hasn’t been seen before. Girl loses boy. Girl acts out. New boy shows up. Audience can tell they should be together long before either of them realizes it. Comedy ensues. Dramatic moment ensues. You get it; it’s the heart of the characters and interplay between them that makes it entertaining.

When so many of us are feeling brokenhearted over the world at large, The Broken Hearts Gallery should provide some lighthearted, carefree relief – and that in of itself makes it worthy of a watch (save for anyone who can’t deal with a strong LGTBQ+ presence/minority/female presence).