This is the Snobby Beer review of Natural Light (AKA Natty Light) from Anheuser Busch in St. Louis, Missouri. Natural Light is a light lager served in cans and bottles. The beer has a reputation as being a college student’s beer of choice due to it’s affordability.

Questions? Suggestions? Let me know what you think! Grab a beer and leave a comment.

This is the Snobby Beer Review of the Lambic made by Rivertown Brewing Co. in Cincinnati, Ohio. The beer style is a lambic, which goes through what is called spontaneous fermentation where natural yeasts and bacteria are used to ferment the beer. Lambics are known for their “wild” flavors, which may include sourness and what is affectionately referred to as “funk”.

It’s a very interesting style, and it was brewed right here in Ohio! This beer is the 2010 vintage. It can still be found at finer bottle shops in the Dayton, Cincinnati, and other areas where Rivertown is distributed.

Questions? Suggestions? Let me know what you think! Grab a beer and leave a comment. Beer. It’s a wonderful combination of barley, hops, water, and yeast. These four ingredients can produce a huge variety of styles of beer, from refreshing Lagers to chewy Imperial Stouts. There are beers for every occasion. Beer is something enjoyed by a diverse group of people. Beer is something you can make at home. It can be cheap, and it can be expensive. It can be widely available, and it can be extremely rare. If you’ve read this far, then you probably can agree: beer is awesome.

Now that it’s almost December, seasonal brews have shifted from Oktoberfests and Pumpkin Ales to Winter Warmers and Spiced Ales. These seasonal beers are among my favorite styles, if for no other reason than they just feel special. I decided to share my review for one of these beers as my first review on Dayton Most Metro.

The Mad Elf, a cheerful creation to warm your heart and enlighten your tongue. The combination of Cherries, Honey, and Chocolate Malts delivers gentle fruits and subtle spices. Fermented and aged with a unique yeast, this ruby red beer has significant warming strength that underlies the pleasant character of this intriguing yet delicious Ale. The Mad Elf, a jolly and delicious beer for the Holidays.

My review for this beer:

This beer is 11% Alcohol By Volume, and 15 IBUs (International Bittering Units).

Served in a Christmas tulip!

This Elf is a lovely deep copper-red color and is more translucent than expected. The head was about a one finger khaki color, and dissipated in a hurry – none of it remained. It looks like a lovely brew! I feel like the cherries were added to give it a good amount of color, but not so much on the flavor (more on that later).

There is some definite big Belgian yeast/spice character coming through. Surprisingly, alcohol isn’t that present. There is a lovely honey aroma, but not a lot of the cherries. There’s a good bit of raisin bread character, and the Belgian spiciness is met with some dark fruitiness. It smells fantastic and inviting.

Yum – this is a big bad beer. There’s a lot of chewy bread-like character, and some wonderful dark fruit character. The sweetness is definitely high, but not cloying. The honey comes through at the back of the tongue and hangs around for a little while after the swallow. The cherry flavor is present, but it’s not very noticeable. The Belgian spiciness is a nice addition to to overall flavor, but isn’t the focus of the beer. Alcohol? Schmalcohol, this beer doesn’t appear to have the stuff. 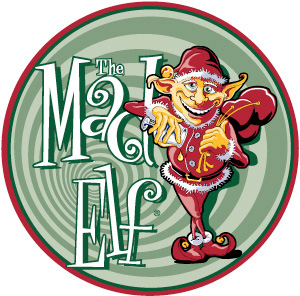 This Elf starts off big and chewy, and feels slightly syrupy (the good kind of syrupy). At the end, there’s a bit of dryness that ups the drinkability. It’s nice and warming after each sip, and even though you can’t taste the alcohol, you can feel it! There isn’t much carbonation to speak of, which works well in a thicker beer like this. The beer is pretty drinkable, yet it demands to be savored.

This beer is excellent. This is definitely not a beer to drink every night, but is great for cold winter nights. It doesn’t have as much spice character as other Holiday beers, but is a MUST for this time of the year. I don’t know what made the Elf Mad, but this beer makes me very happy. Due to the high ABV of this beer, it’s a prime candidate for aging in your basement or cellar. Plus, I love the fact that they sell it in a variety of ways – 22 Oz Bombers, 12 oz. Singles, and even six-packs instead of four-packs! It gives you the opportunity to buy a sixer, drink a few, then age the rest.

This beer is available at fine bottle shops in Dayton, such as Belmont Party Supply, Arrow Wine & Spirits, Liquor & Wine Warehouse, and more. They should also be available at your favorite craft beer bars – but get them fast before they sell out!

This and other reviews can also be found at Snobby Beer.