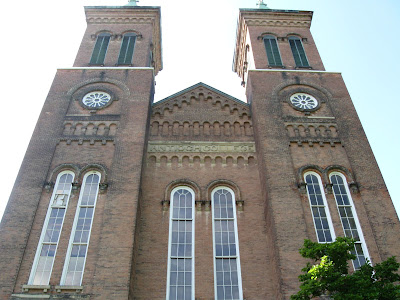 Anitoch has undergone a lot of change in the last two years, as it was announced that the university would be closing the campus indefinitely.  After a lot of support from both the Alumni community and Yellow Springs residents, and two long years of work, it was announced earlier this month that all college assets and the Yellow Springs campus would be transferred from the University to a newly independent College.  Working now to reopen the college will be the next step for the new administration.  As part of our introduction to the Village of Yellow Springs, I was able to spend a few minutes with the Communications Chair of the Antioch Alumni Association, Christian Feuerstein.  With change once again coming to Antioch College, we discuss her time spent at school, the college’s impact and the upcoming Reunion that will be the next turning point in the future of the school.

1)   As the communications chair, what sort of things do you do for Antioch College?

I became the Communications Chair very briefly before the announcement about the closure of the college.  It was actually my second meeting there, so it was quite a shock.  What I have done over the past two years is write press releases, arrange interviews and help work on the website.  I also work with a team of about sixty alumni volunteers in various activities.

2)   What was your reaction when it was announced classes would be suspended and then eventually closed?

The alumni board knew there was going to be a strong reaction from past graduates.  The Reunion in July of 2007 was a focus on alumni coming together.  We had about 700 former students come down to Yellow Springs to get a last look at the college and to find out if there was anything we could do.  That is when we launched the fund raising project to help save the college.

3)   Did you attend Antioch College in Yellow Springs?

4)   How did your experiences there impact your own life?

I owe Antioch College everything.  I arrived there in 1990 when I was seventeen.  My father had passed away 2 years earlier and it was a bad time for me.  My family wouldn’t have been able to afford Community College, but Antioch gave me a wonderful scholarship.  I was a writing major, and I did my co-op in New York City.  I’ve been in publication ever since.  I also met the love of my life there, Mike Heffernan, (class of ’96.) We’ve been together for fifteen years and married about eight.

5)   Why do you think there had been a decline in the college as far as enrollment over the last several years?

There were a number of reasons.  The main reason that the AAUP (American Association of University Professors) cited, was a top down curriculum that was sort of placed upon the faculty to teach but not necessarily designed by them.  They tried to make it work, but explaining how to market the plan to students was not all that it could have been.  So there was some natural frustration on behalf of both the students and faculty in that regard.  One of the projects that we will be working on is maintenance on the facilities, because unfortunately we really did a lot of differed maintenance.  While I don’t have data that this contributed to it, I can’t help but wonder if it was a factor.  Some of the buildings do need some work.  There was also a declining number of faculty because of budget cuts, and it was difficult for students to schedule the classes they needed some times.  With a limited number of people teaching classes, those classes would be unavailable to some students who needed them.

6)   Are there any evaluations on the curriculum being made, or new ideas being discussed on how to teach classes?  Or is the new administration going to use a lot of the old University’s class structure?

That is really up in the air right now, because we don’t really have any faculty at the moment.  I know that we are hiring what are called Morgan Fellows whom are all former faculty members.  With their help, we will be conducting a series of presentations and workshops to help start planning the curriculum.

7)   I have heard discussions about renovating multiple buildings on campus, is any specific location that is getting a focus for when classes start again?

The best way I think I can answer that is to come to Reunion which is October 2nd through the 4th.  There is going to be a State of The College to discuss the renovations and facilities, and to help plan our next step in the process of reopening the college.  Going to antiochians.org will give a schedule of all the events happening at Reunion.  There are several events that require registration but they are indicated on the webpage, otherwise it is open to the public.

8)   The school has a long standing history of acceptance and activism in times when it was not considered the norm, accepting women students upon the school’s opening as well as a handful of African American students as early as the 1850.  It became more progressive with early involvement in the Civil Rights Movement in the 1950s and 60s, and has a strong history that defines the school as a liberal arts college.  what would you say the biggest impact Antioch has had on our country?

Well, the country and even the world need Antioch College.  They need them to be that “laboratory” and catalyst for change.

9)   Which principles does the school most want to help teach students that want to attend Antioch?

We want to give them those experiences period.  The Antioch education has always been based around community, classrooms and co-op.  It’s going to be important for students in the future to be committed to all three; from helping the student body work together, to co-op alternating work and study, and classroom that helps inform and enhances the other two.

10) The school had to be temporarily closed at least 3 times in the past that I could find for various reasons, but successfully reopened each time.  Are you confident Antioch can rebound again as an alternative to the typical higher education institution

Yes, we are really excited.  It is beautiful what we have accomplished so far, but this is the first step in a journey.  We’ve been very encouraged by what we’ve seen, especially with community support.  There are no stories like this in higher education and shows we are once again the catalyst for change; we are not going to wait for the future, we are going to shape it.  We have done the impossible, and that has made us mighty.

11) What sort of ways could residents in the Dayton region get involved with the re-opening and support of Antioch College?

First we’d love for people to get involved.  There is a link that says “Volunteers” on www.antiochcollege.org, which is the new website for the college.  They can find different opportunities there to help out and keep up to date with what is going on at the school.  Obviously if people don’t have time to do this though, we can accept donations to our fundraising cause through the website, which is all tax deductible.