“All the world’s a stage.” So writes William Shakespeare in his play “As You Like It.”

On the 400th anniversary of Shakespeare’s death, Wright State University will become the stage for the latest scholarship on the famous English playwright as part of the 40th annual Ohio Valley Shakespeare Conference. Last year it was hosted by Bowling Green State University; the previous year by The Ohio State University.

The “Encountering Shakespeare” conference Oct. 20-22 will include plenaries on literature and culture, teaching workshops and an array of artistic expressions engaging Shakespeare in musical and dramatic performances. It is designed to encourage educators to integrate performance teaching, digital media resources and reflective analysis of gender, race and class in Shakespeare’s plays.

“I look forward to the intellectual energy and artistic pedagogy that comes from the speakers and from the Stratford actors’ interactive material,” said conference organizer Carol Mejia LaPerle, associate professor of early modern literature at Wright State.

Wright State won a highly competitive, $5,000 Ohio Humanities award to host this year’s conference and to offer a deeply discounted rate for K-12 schoolteachers to attend all of the events, including the much-anticipated Shakespeare Gala. The gala will take place from 5 to 9:30 p.m. on Friday, Oct. 21, at the university’s Creative Arts Center. 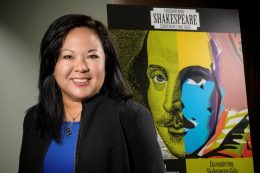 The teaching workshops are run by actors from the Canada’s Stratford Theatre Festival, an internationally recognized repertory group from Stratford, Ontario, known for its production of Shakespearean plays. And the conference will be capped off with a reading by The American Shakespeare Collective from Michigan.

“There is something for everybody,” said Mejia LaPerle. “Shakespearean drama is some of the most compacted in terms of linguistic complexity, but it also provides an unusual enjoyment in figuring out something alien. If you can read Shakespeare, you can read anything. It taps into a skillset that is even more crucial today. That’s an important 21st century skill — the ability to comprehend and make connections across complex, varied linguistic expressions.”

For more information on the conference and gala, visit wright.edu/shakespeare.

This post written by Jim Hannah and originally appeared on the Wright State Newsroom site.