This beer has gotta be enjoyed fresh! I know because the bottle told me so. So fresh, in fact, that this very review is going to be irrelevant in a matter of weeks. Not only does the freshness factor come into play, but the fact that this beer has a very limited distribution (this batch only made it to Ohio and Colorado in small numbers) makes this review nearly pointless. However, as the ever-vigilant beer drinker that I am, I figure why the heck not? I mean come on, this beer was only bottled six days ago! You can’t get much fresher than that unless you feel like swimming around in fermenters… which really doesn’t sound like that bad of an idea now that I mention it…

Anyhow, this beer is 9.4% alcohol by volume and was designed to be consumed FRESH. Like, ridiculously fresh (did I mention it was only bottled six days ago?). They threw a bunch of hops in late into the boil (a technique called “hop bursting”) which contributes more hop flavor and aroma rather than bitterness. Check out more information about this beer here. To you Daytonians, this beer has pretty much sold out at most stores already (and thus more irrelevancy), but if you see it on the shelf at your favorite bottle shop then by all means pick it up. Let’s get to reviewin’.

This is what those in the advertising business call “Sex Appeal”. This beer just looks good. Crystal clear, yellow-orange-amber in color, resting under a slightly off-white head… Yeah, this is the kind of beer that makes mouths water. I love the look of a good IPA, and this beer has got that look. If this beer was a female, I would try my best to “holla”. If this beer was a painting in an art gallery, I would stare at it intensely and occasionally nod my head so everyone around me knew how much I knew about art or whatever. If this beer was a Big Mac, it would be the one in the picture and not the one you get when you order it. If this beer was a… Ok, you get my point.

There are definitely some New Zealand hops in the nose. Notes of grapes, flowers, mango, citrus, earthiness, and a smidge of everyone’s favorite “cat pee” fill my nostrils. There is a deep, dank smell that reminds me of a quaint but “lived-in” basement which adds a bit of charm without being unpleasant. There’s even a bit of hop spice aroma to even things out. There is a good amount of sweet malt, but there’s no mistaking that this beer is all about the hops. 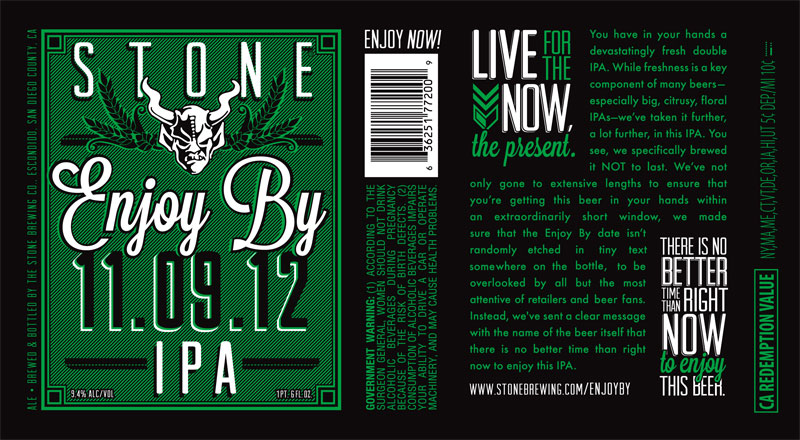 Follows the nose very closely. Once again, the first thing I notice is the deep, dank, resiny hop character. There is a bit more pine on the tongue than on the nose, which at first I feared would be the dominating character. As I sip, however, more of the citrus and tropical fruit comes out. The New Zealand hops make another appearance and bring some earthy grape notes with them. As far as bitterness goes, this beer is on the medium side. Sure, it’s bitter, but it’s not a tongue splitter (I rhymed!). There is almost no alcohol flavor whatsoever. This beer has a ridiculous amount of hop character, and there is a slight muddling of flavors which is a tad disappointing. Overall, this beer is pretty tasty but nothing I’ll be craving.

The mouthfeel really is one of the highlights of this beer. The carbonation and body are both medium, and considering the ABV this beer is not a struggle to drink. The beer coats the mouth with hop resin – the kind that kind of makes you smack your tongue for no explicable reason.

You may have noticed that a word I didn’t use in this review was “bright”. Many IPAs have a bright, refreshing crispness that fellas like me go nuts over. This beer, however, has a somewhat muddled flavor that makes me feel like it’s more of an English IPA than an American IPA, which is crazy talk considering all the American hop flavors. That’s not to say this beer is bad, because it’s not at all! It’s really an excellently balanced IPA, and it drinks more like 6% than 9.4% ABV. That being said, I’m drinking this beer as fresh as possible and it still has a layer of “meh”. Is it worth buying? Yes, absolutely! Is it the IPA to end all IPAs? Not this time. Don’t feel too bad if you missed out on this one (or if you drank it on 11.10.12 or something).