On Hanukkah is it customary to eat foods that are either fried in oil or made with cheese.

The fried foods custom recalls the miracle of Hanukkah. When the Jewish fighters beat back the Greek for their beliefs they came across a Menorah in a Temple. The problem they had was they only had enough oil for one night. Miraculously when the Menorah was lit, it stayed lit for eight straight days. A miracle sent from above many felt, and still do to this day. It is for this reason that Jewish people when celebrating Hanukkah deep fry much of their foods in oil.

Latkes (fried potato pancakes) are traditional, topped with applesauce or sour cream, but there are many creative variations to the pancakes and the toppings. The Food Network offers recipes for Latkes 7 Ways, but I found this great recipe for Sweet Potato Latkes which is quite tasty and lower in calories.

Cut the sweet potato in half so it fits easily into the spiralizer. Spiralize with the smaller noodle blade of the spiralizer (or box grater). Cut into smaller pieces, about 5 inches long. Mix together the sweet potatoes, scallions, eggs, garlic, salt and pepper in a large bowl and mix well to combine.

Heat a large nonstick skillet over medium-low heat. When hot add 1 teaspoon of oil and swirl around the pan. Using a fork, grab some of the sweet potato mixture (roughly 1/3 cup), and gently place it in the skillet lightly pressing down with the fork. You can fit 4 on the skillet. Cook until golden on the bottom, about 3 minutes then flip with a spatula. Use the spatula to press them down to flatten and cook until golden, about 3 more minutes.

The cheesy foods tradition is based on a story from the apocryphal Book of Judith which takes place during the time of the Maccabean revolt. In it, an Assyrian warrior named Holofernes besieges the town of Bethulia, and though Bethulia’s elders are ready to surrender, Judith, a widow, enters the Assyrian camp and gives Holofernes salty cheese to make him thirsty and wine to make him drunk. After he becomes intoxicated, she seizes his sword and beheads him, bringing the head back to her village in a basket. The next morning when the Assyrian troops found the headless body of their leader, they fled in terror. While a severed head is not the most appetizing image, we honor Judith’s victorious and brave use of cheese by incorporating the dairy product into our Hanukkah menus.

Blintzes are basically Jewish crêpes filled with cheese and served dusted with icing sugar (although fillings may vary from sweet to savoury). They are delicious and quite filling – a great brunch or dessert option. Note that you only cook them on one side and you fill them cooked side in.
For the blintzes

BRISKET
A lot of Jews also eat brisket on Hanukkah and, to be fair, most other religious holidays. Why is there a tradition of eating celebratory brisket?  I couldn’t really find any tradition to explain this but here’s my theory.  Most American Jews trace their families back to Eastern Europe where, as a people, they were generally poor and could not afford to eat the best cuts of meat. So what they could afford were the tougher meats that needed to cook at low temperatures for hours before they could be served. Shanks and chuck roasts were popular, and so was the marvelously flavorful brisket.

Brisket is particularly suited to being cooked with a wide variety of ingredients because, although it has a distinctive flavor of its own, it also easily absorbs the taste of the other ingredients in the pot. You can cook it in a tomato sauce or in beer, in a sweet-and-sour sauce or even with sauerkraut. You can use it in Korean barbecue or turn it into a Scandinavian soup using Akvavit, a liquor flavored with caraway or anise.  Choose one that looks good to you from these 30 Hanukkah Brisket Recipes from Allrecipes.

Gelt, Yiddish for money, is often given out to children during Hanukkah. It normally consists of small coins or chocolate coins. The tradition of Hanukkah gelt dates back to an old Eastern European custom of children presenting their teachers with a small sum of money as a token of gratitude.  Instead of buying chocolate coins this Hanukkah, try Martha Stwearts fruity twist on handmade gelt. 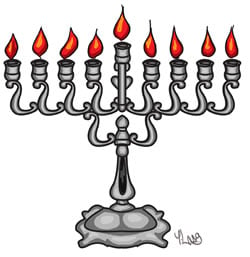 The basic elements of a kosher menorah are eight holders for oil or candles and an additional holder, set apart from the rest, for the shamash (“attendant”) candle.

The eight candles of the menorah must be arranged in a straight, even line, not in a zigzag or with some lights higher than others. The shamash – the “attendant” candle that is used to kindle the other lights – sits a bit higher or lower than the other candles, on the ninth branch of the menorah.

The Chanukah lights are kindled every night of Chanukah. The Maccabees chased away the forces of darkness with swords; today we do it with light.The custom of many communities (and such is the Chabad-Lubavitch custom) is to light the menorah shortly after sunset. In other communities, the menorah is kindled after nightfall (approximately thirty minutes after sunset). Read more on the exact time to light here. Either way, the menorah must contain enough fuel to burn for at least thirty minutes after nightfall.

Regardless of the custom you follow on other Chanukah nights, on Friday night the menorah is lit before sunset, and on Saturday night it is lit after nightfall. (See Special Shabbat Rules below for more information.)

Ideally, you should light the menorah at the earliest possible opportunity. Only delay if you are awaiting the arrival of family members who wish to be present when the menorah is lit. The Chanukah lights may be lit as long as there are people in the streets, or as long as there is another family member awake to participate – but no later than one half hour before dawn. (If no other household member is awake and the streets are already quiet, light the menorah without reciting the blessing.) 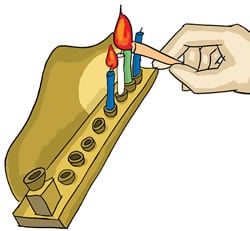 1. Arrange the lights on the menorah. Ensure that there is enough oil, or that the candles are big enough, for the lights to burn until half an hour after nightfall (or, if lighting after nightfall, for one half hour). On the first night, set one candle to the far right of the menorah. On the following night, add a second light to the left of the first one, and then add one light each night of Chanukah – moving from right to left.

2. Gather everyone in the house around the menorah.

3. Light the shamash candle. Then hold it in your right hand (unless you are left-handed).

4. While standing, recite the appropriate blessings. 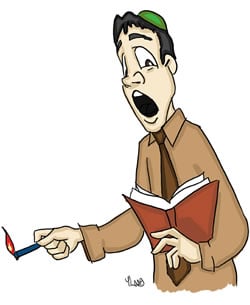 Before lighting the Chanukah candles, we thank G‑d for giving us this special mitzvah, and for the incredible Chanukah miracles:

[Blessed are You, Lord our God, King of the universe, who has sanctified us with His commandments, and commanded us to kindle the Chanukah light.

Blessed are You, Lord our God, King of the universe, who performed miracles for our forefathers in those days, at this time.]